Craig Robinson is best known to Australian audiences through his numerous and highly regarded comedy appearances and comedic acting roles in film and television over several years. This is his eagerly awaited first Australian tour. Best known for his role as Darryl Philbin in the Emmy Award winning USA version of The Office (now in its 9th season), Craig has also appeared in hilarious films such as Hot Tub Machine produced by and co-starring John Cusack, Pineapple Express alongside Seth Rogen and James Franco and Zack and Miri Make a Porno with Seth Rogen and Elizabeth Banks. As a stand up comedian, Chicago born Craig first made his mark in the comedy circuit at the 1998 Montreal Just For Laughs festival. He soon went on to perform his act on The Jimmy Kimmel Show and Real Time with Bill Maher. Now headlining venues and festivals across the US, he does both solo acts we well as full band sets tying together his lyrical comedy with his accomplished skills at the keyboard. This first Australian tour will showcase Craig Robinson’s unique comedy and musical talents with his band The Nasty Delicious. This is not just a comedy show – it's the perfect combination of stand up and music comedy….and not to be missed. 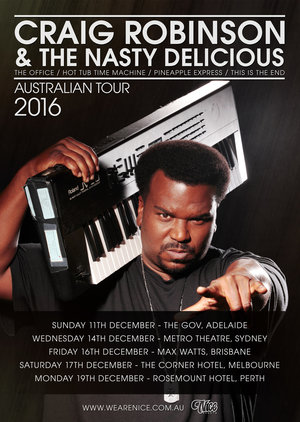