Following the release of their New York Times, London Times and Amazon number one book The Amazing Book Is Not On Fireand accompanying sold out 24-date UK tour and sold out 43-date US tour, Dan & Phil bring The Amazing Tour Is Not On Fire to Australia in August.

The Amazing Tour Is Not On Fire is a full-scale theatrical stage show with hilarious anecdotes, sketches, lots of audience interaction that the guys will probably regret, a story tying it all together and some SURPRISES that audiences will never see coming. Dan and Phil are relatable, heartfelt and hilarious. Their struggles and success haven't changed their strong friendship or their core belief that it's okay to be weird. This is The Amazing Tour is Not on Fire!

Since uploading their first ever videos aged 18 and 19, Dan & Phil have become two of the world’s biggest YouTube stars. Their large and loyal fanbase love their observations on the internet, awkward anecdotes and home life as flatmates in London. In September 2014, the boys launched a gaming focused YouTube channel ‘DanAndPhilGAMES’, and promptly gained 700,000 subscribers in 24 hours – the fastest channel launch ever on YouTube. 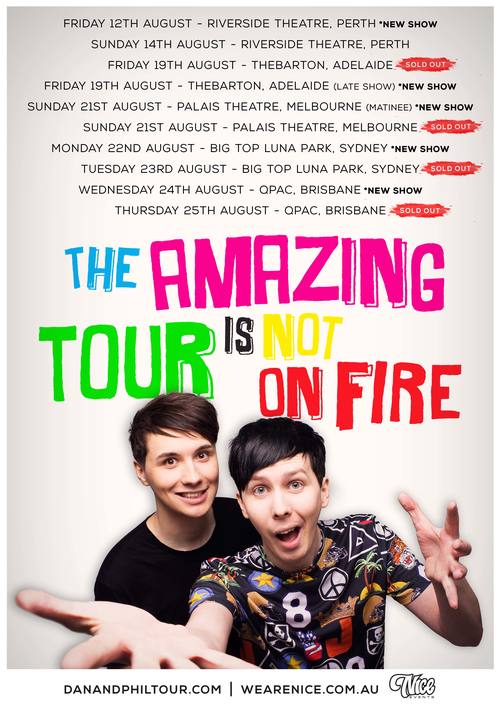