International Queen of Burlesque, Dita Von Teese, is set to bring Australian audiences an opulent evening of glamour and comedy in her critically acclaimed show “Burlesque: Strip, Strip, Hooray!” as she tours Australia in June 2016. The Australian public recently went into overdrive when International Queen of Burlesque, Dita Von Teese announced that she would be bringing her internationally acclaimed show STRIP, STRIP, HOORAY! to Australia. The Melbourne, Adelaide & Perth shows sold out within days of announcement and social media exploded as news spread of Dita’s burlesque show finally making it down under. Due to this unprecedented demand for tickets, there will be extra shows in Sydney and Melbourne and a Gold Coast show has been added to the Australian tour. The decadent spectacle treats audiences to four of Von Teese’s most exhilarating performances, including a brand new version of her iconic “Martini Glass” routine which features a beautiful art-deco style cocktail glass, crystalised from top to bottom with over 250,000 Swarovski crystals. Each show throughout the tour will showcase the stunning visuals of the exclusive acts that have made Von Teese the consummate performer in modern Burlesque, captivating the imagination and transporting audiences worldwide. “I am excited to bring 'Strip, Strip Hooray!’ to Australia for the first time ever” Von Teese said. “'Strip, Strip Hooray!’ showcases my most extravagant acts, along with a show- stopping support cast of the crème de la crème of modern burlesque. Don’t miss us for an unforgettable night of sophisticated striptease and riotous comedy!” eludes Von Teese. The “Burlesque Superheroine” (Vanity Fair) will be joined on stage by her full cast of supporting performers including “the hardest working middle-aged man in show business,” MC Murray Hill, Catherine D’lish, Perle Noire, Jett Adore, Ginger Valentine & Natasha Estrada. 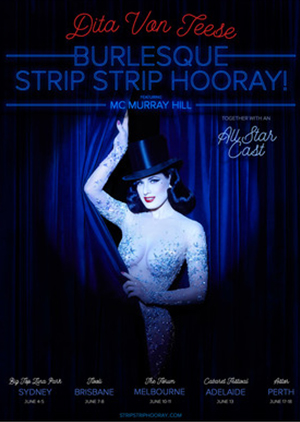