The comedic duo are the writers/actors/editors behind the Webby award winning internet series “Jake & Amir”. They have released two videos a week for over four years, with each episode now averaging more than 500,000 views. As a series, “Jake & Amir” has won several awards including the Webby’s People Voice for Best Web Series in 2010 and has been named one of PCMag’s top 15 best web-only shows. Their series has also appeared on television on MTV’s “The CollegeHumor Show”. The two have recently release their first ever half hour special, “Fired” available for online streaming in DVD form. In May 2013 Jake & Amir debuted their ‘If I Were You’ comedy advice podcast, where they “offer up advice in areas they’re qualified to talk about. Also in areas they’re not qualified to talk about”. The show has appeared on the iTunes podcasts charts in multiple countries, reaching No. 3 in the United States. Streeter Seidell will join Jake & Amir again as a special guest when they head down under. Streeter first gained popularity through his involvement in CollegeHumor, having a hand in all facets- from executive director of the site, to co-author of the first book, to co-star in the videos. 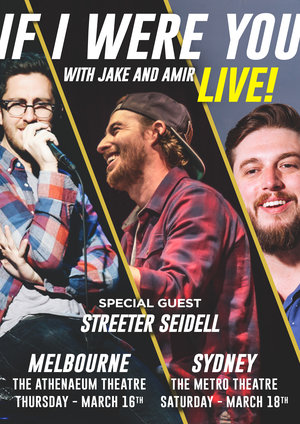