Sam Tsui is a top-notch vocalist, and Kurt Hugo Schneider is the master of many musical instruments. Together, the two have won over the hearts of over 9 million combined subscribers on their YouTube channels and garnered the intrigued views of over a billion. Sam and Kurt are heading down under this July for their first Australian tour! Friends since middle school and both Yale graduates, Kurt and Sam are long-time collaborators. Their artistry and ability as a duo is particularly highlighted by a 2014 Coca-Cola advertisement, featuring Kurt playing on Coca-Cola bottles, glasses and cans and Sam lending his powerful vocals to popular Calvin Harris track ‘Feel So Close 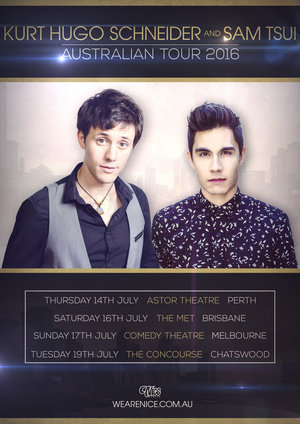