On September 8, 1965, when producers Bob Rafelson and Bert Schneider placed a classified ad in The Hollywood Reporter seeking “4 insane boys,” they had no idea that they were about to unleash Monkee-mania! But that’s exactly what happened the following year when the first episode of “The Monkees” debuted on NBC on September 12, 1966. 50 years later and The Monkees anniversary show is coming to Australia and New Zealand. After sell-out North American shows, and with a brand new album “Good Times!”in the charts, Micky and Peter are bringing the Monkees magic downunder. The Monkees 50th Anniversary show is a unique concert experience. Times may change but infectious pop hits and wonderfully charismatic characters stay in our hearts and memories forever.  “We’re coming out to Australia and New Zealand and it’s the first time I’ve been back since the 80’s and I can’t wait!” Micky Dolenz 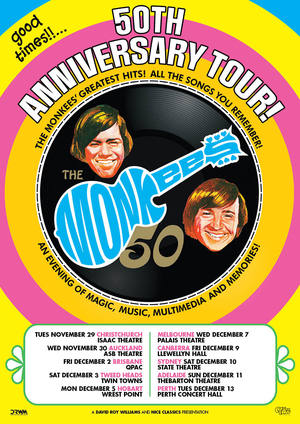